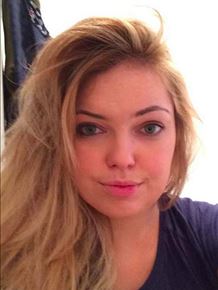 Alice began learning violin at a young age at home as her mother was a violin teacher. As a Suzuki kid, she began to learn by ear and from watching other older children. She continued her Suzuki training until the age of 16, attending workshops abroad in France and Iceland were she was exposed to world-class teachers. At 17, Alice began violin lessons with Fionnuala Hunt. Alice won the Swords School of Music competition in 2007 and completed in Feis Ceoil and other Dublin competitions. Alice has played in many orchestras in Ireland including The National Youth Orchestra of Ireland, Young Dublin Symphonia and UCD Symphony Orchestra. Alice now lives in London, working for a Finance Consultancy firm, she still plays the violin. She also returns to Dublin especially for the Festival every year and is the current Back Stage Manager, where she ensures that all of the performances run smoothly.

I still play violin and my violin comes with me no matter when I live, I don’t think I’ll ever stop playing.

How did you become involved with youth orchestras and the festival?
I became involved with the festival as my mother used to work at it and I was brought along each year. In my mother’s typical style, I wasn’t put in a corner but encouraged to get involved and lend a hand. It was great fun as a kid though; you would get little jobs like sticking posters to the walls backstage and setting up the front of house desk with flyers. Hot chocolate was always the payment.

Can you remember the first festival you attended? Do you have a favourite festival out of them all?
I think the first festival I attended I was in the audience with my dad and brother for the concert and backstage with my mam during the day. I remember the ambassador from Penney’s presenting an award in a long dress and I wanted the dress. At the end of the concert loads of balloons fell from the ceiling and we tried to collect as many as possible!
My favourite…I don’t think I have a favourite. I have fantastic memories from different ones. One festival I remember performing in the afternoon and being a back stage hand in the evening. That was fun but tiring!
Another festival I remember there was t-shirts for each performer, so that involved interesting logistics backstage. Last year I had a lot more responsibility too and it felt like a completely different event, especially now I’m older and more involved you understand the work that the team does before the festival which is so extensive.
My favourite part of the day regardless of any year is the 30 minutes after the evening performance. The atmosphere backstage is electric. If everyone is happy it means we did a good job. The buzz I get from that would keep me smiling for days.

Can you remember your first job at the festival?
My first proper job at the festival was handing out flowers on stage to the conductors after each performance. I remember Una O’Kane walking me onstage when the hall was quiet and explaining the task. During the performances I would wait with the stage hands in the wings and they seemed so grown up and big! The best part was if a flower was left over I was able to keep it.

What impact did the National Concert Hall have on you at first?
The NCH is so beautiful I was in awe the first time I saw the hall. The chandeliers are so striking in the John Field room too. Performing in any big concert hall is always exciting, especially in an orchestra because you are doing it with your friends. The NCH is a really special concert hall. I’m from Dublin and I’m proud of the Irish talent that performs there and the talent the NCH attracts too.

Are you still involved in the festival? If so, has it changed much since you played there?
I’m still involved with the festival. Last year was my first year as backstage manager, so I am responsible for all of the performers, their instruments and the timetable for the day. I was so proud of the backstage and stage management team; there are only five people in the team who ensures that the day goes to plan. It’s a huge achievement for a team of five to do this. It is always a small team backstage and that has never changed. It’s a credit to anyone who has worked backstage at the Festival that the IAYO management has never thought it necessary to get more people backstage.

What is the best thing about being involved in the festival?
The excitement. I used to be excited as a kid to perform at the Concert Hall and now working there I love seeing the kids arrive at the NCH. For so many of them it is their first time performing at a big venue and their nerves and giggles are infectious. I can’t remember any kids that were scared to go on stage and play. Most of them are playing in the wings or making sure their outfits are neat. It is really sweet to be a part of that.
Each year I always bump into people I know too, it’s a great chance to catch people and say hello!

Do you think your involvement in this has helped your future career?
Yes, I do think so. I work in London within an investment bank and I think performing on front of people gives you confidence beyond measure which is needed in my job.
To be a bit cheesy too, the show must go on and it’s our responsibility that the show goes on and that’s a good life lesson.
I think the experience has also helped when I have a tight deadline in work; there is nothing more stressful than the 10 minutes before the afternoon performance dealing with a violin string breaking, trying to calm the kid and not ruin their experience and also getting the string fixed ASAP. After that, banking is a doddle!

What part does music play in your life now? Where does your love of music come from?
I still play violin and my violin comes with me no matter when I live, I don’t think I’ll ever stop playing.
I think music stems from my family. My mam has a great love of classic music passed on from her parents and you could be woken up with Frank Sinatra or The Dubliners from my dad playing CDs in our house. Myself and my brother laugh about our taste in music now, it is no surprise to find Thais, Glen Hansard and Clean Bandit on my favourite playlist.

What makes you keep coming back to be a part of the festival?
The atmosphere during the day is great both backstage and front of house. There are so many reasons to still be a part of it, but I think the value it brings to young players is fantastic. The festival is also pertinent to the community of music teachers around the country reinforcing links and providing a forum for teachers to communicate and share ideas – that is enough for me to come back each year.