On the importance of youth orchestras in Ireland…As there is no training orchestra programme in Ireland these orchestras are the only way young musicians can gain enough playing experience of standard repertoire so vital to the professional audition process. 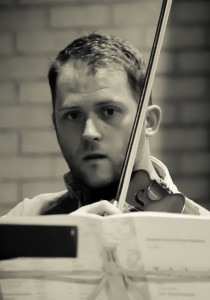 David Wallace began studying piano and violin in the Kilkenny School of Music and by the age of 10 he had arranged the theme from Wagner’s Rienzi Overture for string ensemble and percussion. This began a lifelong fascination with composition. He completed his undergraduate studies at the Cork School of Music where he studied harp, violin and composition. He achieved 1st class honours and went on to study an MMus in composition at the Guildhall School of Music and Drama in London. He was the only postgraduate selected to write a piece for the 125th anniversary celebrations of the school and he won the Tracey Chadwell Memorial prize for composition. He was Composition Fellow at the Guildhall in 2006/07 and he lectured in composition and orchestration at the Cork School of Music from 2006-2008. His music has been performed throughout Europe, America and Asia by performers such as the RTÉ Vanburgh Quartet, The Amarilli Trio and Rebecca Van Den Berg.

On composing for and working with youth orchestras.. I am always impressed with the level of performance. It is not an easy thing to play a piece no one has heard before.

How did you become involved with youth orchestras and the festival?
I started learning the violin in Kilkenny School of Music and played in the youth orchestra there. Then I went on to study with Maeve Broderick and played in the Royal Irish Academy of  Music Symphony Orchestra before moving to Cork for my BMus. I played with the Irish Youth Orchestra for a number of years. I was 16 getting into the over 18’s and at that age it was so exciting and meant I got to play with some of Ireland’s best violin players. I learned a lot from those few years and played under some great conductors. Even now I think how lucky I was back then.

Can you remember the first time you played at the festival?
The first time I played at the festival (2002) was in my first year at Cork School of Music and we played Schubert ‘Unfinished’ and the last movement of Tchaik 4. It was a fantastic violin section full of people now doing really well in the music profession, so I feel very privileged to have played with them.

What impact did the National Concert Hall have on you? Was it the first time you had played on such a big stage?
The NCH is a nice stage and I had played on it with the IYO and RIAM Symphony Orchestra a lot so I was used to it.

Do you think this prepared you for future performances? How does the experience of performing then compare to now?
Yes it definitely gave me the experience of a professional stage environment. Performing is not so daunting now. Stage fright was a big issue for me, as with many, if not all, performers at some point in their career, so getting lots of experience on big stages helped to negate this and now I have no problems, or at least can manage them!

Did being part of the festival and youth orchestras in general help the transition to where you are in your career now?
Of course! Being a composer doesn’t and shouldn’t mean not playing to the best of your ability. Playing to such a high standard with KYO, CSMSO, RIAMSO and IYO helped enourmously with the transition to the profession. As there is no training orchestra programme in Ireland these orchstras are the only way young musicians can gain enough playing experience of standard repertoire so vital to the professional audition process.

What was the best thing about being involved in the festival?
Getting to play great music with fantastic musicians and making some good friends along the way.

What is it like for you to work with youth orchestras as a composer? Do you like to challenge them technically? Are you impressed with their levels of performance?
It can be really rewarding to work with youth orchestras. It is quite a challenge though, as you are often dealing with a mix of abilities and standards across the orchestra. Attending some rehearsals was a must and I tended to know the orchestras very well before writing a note. I am always impressed with the level of performance. It is not an easy thing to play a piece no one has heard before, there are little or no references in terms of recordings and depeding on the style of the composer it can be difficult to really engage an audience. These are all the challenges though and it makes it all worth while when you hear a committed and exciiting performance from any orchestra.

What inspired you to take up more of a career in composing than playing? Was this something you always thought about when you were a young player?
I always composed. I was obsessed with arranging famous tunes for various combinations of instruments for a few years and then that blossomed into composing my own pieces. I started around the age of 10 and then just kept at it. Composing is something that takes a lot of time and energy. It requires so much patience and not everyone will like what you do so you develop a thick skin. I always wrote music I would like to hear and it was a bonus if people liked it – and they did so I was very lucky really. I was also very fortuante to have some wonderful teachers, some of whom I am only really starting to appreciate now, and some fantastic performer friends who constantly programme my stuff.

As a multi-instrument player, what is it like composing seeing as you understand a lot of instruments?
It does help but I like to consult the real experts when I can as I can’t play everything and instruments can do some wonderful things when you get into the realm of extended techniques. It was very useful to gain experience in violin, harp, viola, percussion, oboe and cor anglais though.