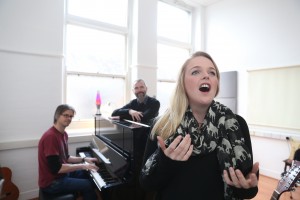 DIT Conservatory of Music and Drama presentrf the concert performance premiere of Breakdown, a new opera by Andrew Synnott and John Breen. Breakdown is a fascinating portrait of the lives of three performance artists attempting to perform ground-breaking work. The artists are forced to battle the societal, physical and emotional breakdown of their worlds and the world around them in order to triumph.

Composed and conducted by Andrew Synnott, PhD student at DIT Conservatory. Stage coordination by Jennifer Hamilton. Featuring vocal students and graduates of the Conservatory and the DIT Symphony Orchestra.

Prelude performance by the DIT Symphony Orchestra of Paul Alday’s Grand Symphony for a Full Orchestra, one of the first known symphonies composed in Ireland (c1816).