Music is a vehicle for self-expression, passion, discipline, respect, positive self-criticism, persistence, social interaction and responsibility, to name but a few areas. When you learn music, the outcome to most people is music, but we rarely realise that all these other aspects are being instilled in us all the way through our musical lives. 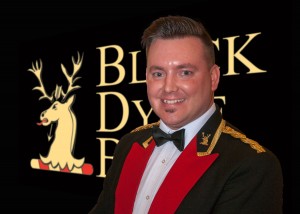 Gary Curtin was born in Cork and began playing the baritone at the age of 12 but later moved onto the euphonium. He instantly fell in love with this instrument and wanted to develop his playing skills further and further. Gary was the first euphonium player to study at degree level at the Cork School of Music, where he also went onto study at Masters level. Whilst at the Cork School of Music he was awarded the Yamaha Solo Prize. In 2005 he moved to Manchester to further improve his studies at the Royal Northern College of Music where he immersed himself in the brass band scene. He played solo euphonium with Wingates Band and the Fairey (Geneva) Band before moving to the Principal Euphonium seat at the Black Dyke Band which he still holds today. He won Best Euphonium at the 2010 British Open Championships at Birmingham Symphony Hall, which he also became a British Open Champion again this year winning Best Euphonium on the day.

The kick I get from performing or hearing a student come to a lesson having worked hard and improving over a week, and knowing I have had a hand in that is a feeling that I would not get in some other professions.

How did you become involved with youth orchestras?

My involvement in the Youth Orchestra came when they were to undertake the monumental task of preparing and playing Wagners Ring Cycle. Within this was a part for a Bass Trumpet and this was where I came in. The NYO was a brilliant course to be a part of, learning music for the mature musician that I would not otherwise have been exposed to, spending time with friends and also learning what life in the real world of musicians could really be like. I also attended many Irish Youth Wind Ensemble courses. My instrument being the euphonium, this was much more suited to me.

If you played at the Festival of Youth Orchestras, can you remember your first impressions of it? Or if you had played at the National Concert Hall before this, what impact did such a big stage have on you?
My experience of playing at the Festival of Youth Orchestras was with the Cork School of Music Symphony Orchestra many years ago. The prospect of playing at one of Ireland’s most prestigious halls was fantastic, and also knowing that it was the home of the RTE National Symphony Orchestra was a thrill too. It was of course a daunting task to play in an iconic Irish venue, but one I relished for sure. Living in the moment was the way forward I believe and I believe I simply sat back and soaked it up. Since I have been incredibly fortunate to perform in some of the best concert halls in Europe

How does your experience of playing when you were younger compare to now? Do you still experience some of the same feelings (anxiety? Nervousness etc?)
I have always been a rather calm player/performer. While I do feel nerves to a level, I have also always told myself that me missing a note or making a little mistake will realistically have no bearing on the greater world and that I should simply enjoy the experience. This helps to keep me relatively relaxed. Music should be about putting your heart and soul into making the 2D black and white notes on a page become 3D, and have some feeling, a distinct direction and story. My students are told on a regular basis that you can only control the future, not the past, so should you have a mishap, then you must leave it in the past, as you only have control of what is coming next, in the future.

Did being involved in youth orchestras or bands help you to prepare for your musical career now?
Of course. Without bands I would have not developed as quickly. Peers are a big influence on pushing a young player forward, so being in their company inspires other young players to develop and progress. When I was young, my local band had players who I looked up to which gave me the impetus to practice and ensure I was always moving in the right direction as a musician/player, without my knowing. Luckily for me there was a local brass band near where I lived, as the euphonium is most at home in this ensemble. I got the bug relatively early and simply wanted to play. I enjoyed playing in ensembles with friends. The very brief appearance of Irish Youth Brass was something that also injected me with passion of music and playing.

What was the best thing about being involved in music from a young age?
There are a number of advantages to being involved in music from a young age.
Probably the most important is that it kept me out of trouble. While I was no tear away, I could easily have fallen in with the wrong crowd, and I hold music responsible for keeping me on a good and positive track. My parents also had a very important part in that.
Secondly would be the amazing friends, colleagues, acquaintances and personalities I have encountered. Some really fascinating people with mind boggling talent and blatant evidence of hard work and commitment to a passion.
Third on the list I suppose would have to be passion for something in my life. I personally could never sit behind a desk looking after paperwork all day, it is simply not me. I feel a need to be doing something related to playing or teaching, and the kick I get from performing or hearing a student come to a lesson having worked hard and improving over a week, and knowing I have had a hand in that is a feeling that I would not get in some other professions.
Fourth is that I have been taught respect in many different guises. Discipline for what I do and create, along with discipline and respect in relation to others such as players and conductors, and that hard work yields results. Respect regarding time keeping, making sure that others do not feel like I have little respect by being late for rehearsals or unprepared.

Why do you think it is important for children to be involved in music and youth orchestras?
Music is a vehicle for self-expression, passion, discipline, respect, positive self-criticism, persistence, social interaction and responsibility, to name but a few areas. When you learn music, the outcome to most people is music, but we rarely realise that all these other aspects are being instilled in us all the way through our musical lives.

From your experience, what are the differences between the classical youth orchestra world to playing with a band? Do the two areas interchange or help each other in any ways?
When I was younger they interacted a lot more than they do now. Now I am more aware of the two different animals so to speak and how the genres both compare and differ. Some things I do in a brass band will work while sitting with an orchestra, other things would be frowned upon.
Playing in an English brass band is very much a different style compared to orchestral playing, the use of vibrato being a rather distinct one. Time spent playing and listening has helped me to develop as a musician and have an ever growing understanding of how to adapt my playing for different areas.