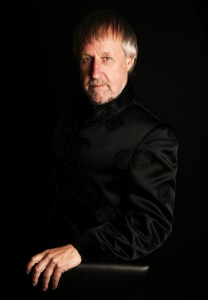 Gearóid Grant is a Dubliner. He graduated with a BMus degree from University College Dublin, and since then he has combined a freelance career as conductor with a career in music education.

Gearóid was the conductor of the Junior National Youth Orchestra of Ireland since it was formed in 1980 and throughout this period has been an active member of the Board of the NYOI. He conducted the NYOI at the RTÉ Proms and on national television live from University Concert Hall, Limerick on December 31st 1999 to play in the new millennium.

Gearóid celebrated 25 years as conductor and musical director of the Rathmines & Rathgar Musical Society. He has worked with all of the RTÉ orchestras, the Ulster Orchestra and the Irish Chamber Orchestra. He devised the popular “They don’t sing like they did in the old days” which has been a sell-out success for the RTÉ Concert Orchestra with performances in the Helix and at the National Concert Hall.

Gearóid devised and continues to present and conduct the acclaimed Irish Times series ‘Music in the Classroom’ which introduces music to 30,000 Irish children annually, with 24 performances at the National Concert Hall in Dublin and in major venues around Ireland. The programme is developed in conjunction with RTÉ, The Irish Times and the Department of Education. He also conducts the Cross-Border Orchestra of Ireland and has toured with them many times in the USA.

Gearóid conducts all of Shaun Davey’s major works, including premieres of his Relief of Derry Symphony in 1989 and his Concerto for Uileann Pipes and Orchestra, performed for the first time at Greenwich Festival in London. These works are recorded for Tara Records. He has an extensive repertoire of Irish music. He has conducted the Irish Film Orchestra, of which he is Associate Music Director, for many years.

Gearóid Grant is one of the outstanding personalities in his generation in the Irish music world and makes an ongoing and unique contribution to many areas of Ireland’s cultural life, but nowhere more importantly than through his work training and inspiring new generations of young musicians in the National Youth Orchestra of Ireland.