I don’t think you can put into words how important youth orchestras and festivals like this are. 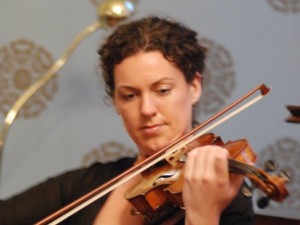 Maria Ryan won the coveted Heineken Violin Competition in 2010 and she is currently based in London where she was appointed the prestigious position of leader of the Southbank Sinfonia for the 2010 season. Maria graduated with first class honours from the Cork School of Music and the Hochschule für Musik Köln, in Germany. She has travelled throughout Europe, the USA and South America to perform in various ensembles such as with Camerata Ireland where she performed in Carnegie Hall. She is also a founding member of The Amarilli Trio. Maria was the proud winner of the Feis Ceoil Aileen Gore Cup / Raymond Kearns Bursary and the Royal Dublin Society Music Bursary in 2008.

I have since played in prestigious halls including Carnegie Hall New York, Konzerthaus Berlin, Musikverein Vienna, Wigmore Hall London, and the Albert Hall London, but it all started in the National Concert Hall with my red St Canice’s jumper and Rustic Dance!!

Can you remember the first time you played at the festival?
I remember I was on crutches the first time I went to the festival!! I was leading the St Canices School ‘A’ Orchestra. I’m sure we must have played ‘Rustic Dance’ arranged by Charles Woodhouse! It was always a firm favourite because of a pizzicato passage in the middle of it!

If you played there more than once, do you have a favourite festival?
I am sure I played at the festival with my secondary school orchestra too. The Loreto Secondary School Kilkenny. But I have very fond memories of the St Canices School Orchestra as it was my first time to play in the National Concert hall. I also played with the Kilkenny Youth Orchestra, but they played in the festival after I had gone on to University – they also had red jumpers!

What impact did the National Concert Hall have on you? Was it the first time you had played on such a big stage?
It was such an incredible opportunity to play in the National Concert Hall of Ireland! I had sung with the National Children’s Choir there the previous year, but this was the first time with my violin. I remember it being such a big deal!! My parents were so proud, and the whole experience – the preparation, the day itself, and the discussions afterwards, were full of excitement!

Do you think this prepared you for future performances? How does the experience of performing then compare to now?
It was amazing to play in such a prestigious venue at such a young age. It certainly starts the preparation for future performances. I have since played in prestigious halls including Carnegie Hall New York, Konzerthaus Berlin, Musikverein Vienna, Wigmore Hall London, and the Albert Hall London, but it all started in the National Concert Hall with my red St Canices jumper and Rustic Dance!!
Performing is still exciting! And it’s always lovely to come home and perform in the National Concert Hall.

Did being part of the festival and youth orchestras in general help the transition from amateur to professional?
Yes it did, because from a very young age you have training in how taking part in a concert with a big orchestra works, from how an orchestra tunes – as a violinist, never tune until the leader does! to knowing you should always have a pencil to write things on your part, things which still apply to my life!!

What was the best thing about being involved in the festival?
Getting to perform in such an important prestigious venue and getting to see other youth/school orchestras and meeting other musicians from all over the country.

Having had such a prestigious career so far, how important do you think youth orchestras and events like the festival are to young musicians?
I don’t think you can put into words how important youth orchestras and festivals like this are. They give young musicians a chance to make music together, they rehearse on a weekly basis for the most part, so musicians learn so much more than just the dots they play. They learn how to interact with each other, to be responsible for their own learning because as part of a group each member has to pull their own weight, they learn to be punctual, even if you get dropped to rehearsal, as I did, you had to be back from the shop after break! The list goes on and on!

I definitely wouldn’t be where I am today if it weren’t for St Canices School Orchestra and Regina O’Leary, and the Kilkenny Youth Orchestra and Philip Edmondson.

And of course my parents for all the taxi-ing, encouragement and patience!