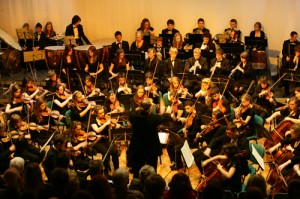 Since 1970, The National Youth Orchestra of Ireland (NYOI) has provided professional leadership and inspiration to talented young Irish musicians through intense orchestral training and performance opportunities of the highest standard. Aged between 12 and 18, its current members are selected through competitive national auditions and represent the best young musical talent that Ireland has to offer, both north and south of the border.

NYOI programmes create opportunities for young musicians to engage with each other on a national level and to perform and interact with professional musicians and conductors. It is a unique environment through which they are influenced by the practice and standards of those around them and by their professional mentors. In 2015, NYOI celebrates its 45th anniversary and the musicians are excited to mark the occasion with this performance at IAYO’s 20th Festival of Youth Orchestras.

In December 2014, NYOI fulfilled its goal of reviving the Touch Bass residential course for rare-breed instrumentalists aged 12-18. This is an important development in helping orchestras to achieve well-balanced sections in the future. The revival of this important project would not have been possible without the support from the trustees of the Richardson-Smith Trust, which was established by NYOI’s founder, Dr Olive Smith, in 1976.

NYOI receives annual funding from the Arts Council and National Lottery funds through the department of Education and Skills. NYOI receives generous support from private benefactors and NYOI Friends. We are also grateful to our media partner, The Irish Times, for its support.