On playing at the Festival for the first time….There was huge excitement in our school as it was our first time performing in the National Concert Hall. We were playing a piece composed for our orchestra called Shearwater, by a local composer Michael O’Grady. There was a solo cello section in the piece, which I got to play as principal cellist of the orchestra. We used to listen to it at home afterwards on the tape recording of the festival! I also remember my mother’s nerves as she was conducting the orchestra and it was her NCH debut as a conductor also! 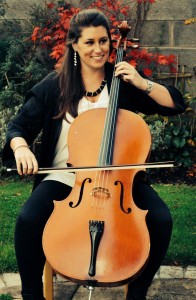 Ruth is a past pupil of St Canice’s Co-Educational National School, where she began her musical career playing the cello. She has studied at the Royal Irish Academy of Music and at Waterford Institute of Technology. She completed her studies in cello performance in Den Haag, Netherlands in 2003 but returned to Ireland once again where she completed her Bachelor of Education Degree and Associate Diploma in cello teaching.  Ruth is now a member of the teaching staff of St Canice’s National School and plays a huge part in St Canice’s Instrumental Music Programme. She teaches cello to children from senior infants to 6th class level in the school, as well as tutoring chamber music and conducting the Senior Orchestra who will be performing under her guidance at the 20th Festival of Youth Orchestras.

Even now performing in the concert hall has that same excitement, possibly even more now as a conductor.

How did you become involved with youth orchestras and the Festival?
My first ever experience of playing with an orchestra, participating in the festival and actually performing in the National Concert Hall was as a member of St Canice’s National School orchestra. It was the norm to play in the orchestra in school as most of the children in my class were playing instruments due to the high participation level in the music programme in St Canice’s. It wasn’t until I became a member of the Royal Irish Academy of Music and started playing in the orchestras there that I realised it wasn’t just something everyone did in school! The music then started becoming more challenging and exciting and it was then that I became even more passionate about playing and performing as part of an orchestra.

Can you remember the first time you played at the Festival?
Yes, I remember it vividly. There was huge excitement in our school as it was our first time performing in the National Concert Hall. We were playing a piece composed for our orchestra called Shearwater, by a local composer Michael O’Grady. There was a solo cello section in the piece, which I got to play as principal cellist of the orchestra. We used to listen to it at home afterwards on the tape recording of the festival! I also remember my mother’s nerves as she was conducting the orchestra and it was her NCH debut as a conductor also!

If you played there more than once, do you have a favourite Festival?
Yes I have played several times as a member of St Canice’s Senior Orchestra (which was called the A orchestra at the time), Loreto Secondary School Orchestra, Royal Irish Academy of Music Symphony Orchestra and the National Youth Orchestra of Ireland. I think my favourite festival was probably the very first one as there was huge excitement when first walking out onto the big stage for the rehearsal. Another year I really enjoyed was when I performed with two orchestras in the same festival. (I can’t remember the year but it was with the National Youth Orchestra and either the RIAM or Loreto.)

What impact did the National Concert Hall have on you? Was it the first time you had played on such a big stage?
I loved the size of the auditorium when I walked out onto the stage for the first time for our rehearsal. It was a great feeling of nervous excitement anticipating all the seats full and performing to such a large audience. I just wanted to come back and play there again and again. Even now performing in the concert hall has that same excitement, possibly even more now as a conductor and getting to witness the children walking out on that stage for the first time. It’s such a fabulous experience to get to share that with the children having been there myself at that age.

Do you think this prepared you for future performances? How does the experience of performing then compare to now?
Yes I think it was such a wonderful introduction to performing that it left me wanting to perform even more. It gave me a taste of what it would be like to become a professional musician which gave me the drive to work hard and develop further musically. I know it was the same for my brothers who are now both working in London playing with professional orchestras. However, it does get harder as you get older! There was no such thing as fear or nerves as a child.

Are you still involved in the Festival? If so, has it changed much since you played there?
It is lovely to be back involved in the festival again, now as a conductor and working with the orchestra that gave me my first taste of the NCH. The festival is still acting as a wonderful stepping stone for local orchestras and performers to participate in a national festival and perform to a larger audience than they would be accustomed to. If anything the festival is constantly improving and bringing up the standard of youth orchestras around the country.

What was/is the best thing about being involved in the festival?
I relished and thoroughly enjoyed each and every opportunity I have had to perform in the festival on the Concert Hall stage. For children it is perhaps the only opportunity they will get to perform in the National Concert Hall. It is a great focus for the year for an orchestra and I find that we push our orchestra with more challenging music so that we have the best possible programme for our level when we perform as part of the festival. It is also a wonderful opportunity to hear other youth orchestras from around the country and hear music that you might like to try out with your own group. Personally, I have to say the positivity towards music in our school at the moment and the buzz over such a big concert coming up has been fabulous and it is a direct result of the festival.

How did you find the transition from player to conductor?
This was tricky as there is so much more pressure on you as a conductor, especially when you have nearly 90 children aged between 10 and 12 performing in front of you.

Was it harder to be the conductor at the festival than a player? Were you more nervous? What was it like conducting at the NCH?
Definitely as a conductor! I can’t remember ever feeling as nervous as when I conducted for the first time in the last festival. I feel far more responsible for our performance as a conductor rather than performing as part of the orchestra, especially as the children work so hard to learn all their music and you really want it to go well for them. Whilst I was very nervous, the exhilaration once the performance had finished and gone well was amazing! So worth it and I can’t wait for the next performance in the NCH in February.