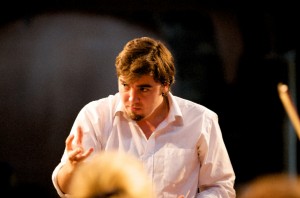 Tom Crowley is a native of Cork. He graduated with honours from the Cork School of Music where he studied for a BMus with Adrian Petcu. During his studies, Tom spent a year on an Erasmus exchange in Bucharest where, amongst other things, his interest in conducting was sparked.

In 2012, Tom returned to Ireland having spent three years completing a Masters in orchestral conducting in Bucharest where he finished first in his class.

While in Romania, Tom studied under Maesto Dumitru Goia; a disciple of the St Petersburg school of conducting. It is in Romania that Tom had his professional debut with the Botosani Philharmonic. He has also conducted the National Chamber Orchestra of Moldova. Before returning home, Tom placed 2nd in the Jeunnes Musicalle International Conducting Competition in 2012.

Now based in Cork, he happily splits his time between the violin and conducting. Tom conducted the premiere of Inspirit by Sam Perkin with the Concorda Chamber Orchestra in 2013. He has formed a chamber orchestra in Cork; the Stormport Sinfonia, with whom he has most recently recorded a the soundtrack for an Irish documentary A Doctor’s Sword. He is the principle conductor of the Cork Youth Chamber Orchestra, and works frequently with the Quercus Ensemble in Northern Ireland.