On playing at the Festival…I remember meeting Mary Robinson (the photo still hangs on the wall at home). I remember watching a soloist with another orchestra and thinking “Oh God, I’m useless compared to that!”. I remember shaking uncontrollably when I was leader and therefore had to take on a solo myself and wanting time to speed up or the ground to swallow me. 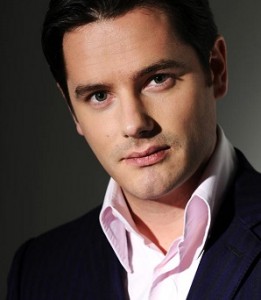 Tony Lundon is originally from Galway, but is probably best know for his appearances with Lord of the Dance and being a member of pop group Liberty X which gained worldwide success. Tony presented various television programmes after Liberty X split in 2006, such as The Den on RTÉ 2. In 2010 he moved to New York to study film and he returned to the UK in 2012 to establish his own production company, The Cell Productions. Tony’s production company has worked on various projects in different genres, such as drama, documentaries and promotions, including a catch-up film to Channel 4’s award winning series ‘One Born Every Minute’ and a short film for the Scout Association which has become their most watched worldwide.

I thought I’d become a lawyer, but music and movement and words and pictures, combined, is what I’ve given my professional life over to, and it started with the violin.

How did you become involved with youth orchestras and the festival?
I joined the Galway Youth Orchestra having attended violin classes at the same venue. I remember seeing lots of people going into the main hall for rehearsal as I’d come and go from my class and from hearing the big noise coming from inside – I used to sneak a peak and listen in while I waited to be picked up. That peaked my interest and I wanted to get involved.

Can you remember the first time you played at the festival?
I have a few very distinct memories… I remember meeting Mary Robinson (the photo still hangs on the wall at home). I remember watching a soloist with another orchestra and thinking “Oh God, I’m useless compared to that!”. I remember shaking uncontrollably when I was leader and therefore had to take on a solo myself and wanting time to speed up or the ground to swallow me. The bowing action left a lot to be desired on that occasion! I remember the thrill of hearing our sound resonate through the hall and the relief of the bow.
A chance to play at a grand venue with a huge audience, a trip away, an opportunity to grow friendships within my own orchestra and also to meet and hear new people – it was all very exciting.

What impact did the National Concert Hall have on you? Was it the first time you had played on such a big stage?
To play at the NCH was amazing. I played at the Festival having spent years as a member of of the youth orchestra set up in Galway. Getting the opportunity to play at the festival and at the NCH very much felt like a reward for sticking with music over the years – at that age, as much as I loved music and that I had some capacity for musicianship, there was always distraction and big occasions like the festival focused the mind and the will away from other teenage pursuits!
Trips to the NCH to attend recitals and concerts happenned on occasion when I was growing up and I was always blown away. To then be given an opportunity to live out the fantasy of being good enough to sit on that stage and play for an audience was incredible.

Do you think this prepared you for future performances? How does the experience of performing then compare to now?
Performing at the festival without doubt prepared me for what came after. The big stage, the big audience, the big moment and sometimes the accompanying crippling fear – to experience those things, to get out there and not only get through it but enjoy it, regardless of the fear, was confidence-building and a life lesson in many ways. The nerves have always stayed with me whether it was as a dancer with Lord of the Dance or a singer with Liberty X, or even then later as a TV presenter. Even now as a director, the ‘big shoot’ looming gives me sleepless nights. But it’s par for the course, as is my confidence that I’ll get through it and enjoy the big moment when it comes.

What part does music play in your life now?
Music took over my life for a time but I seem to have it where I want it now!
I produce music projects through my production company from time to time, continue to perform at gigs now and again with my old band, Liberty X, I DJ a bit just for fun and can honestly say music is often instrumental in how I generate ideas for the films and videos I make, how I shoot and direct them, and especially how I find the rhythm of the story when editing. At the ripe old age of 35 I’ve come to consider the majority of what I hear on commercial radio as pointless noise, probably as a result of having been someone whose job was to create and promote it, and have taken to playing mostly classical music in the car on the way home from a long day’s shooting.
I thought I’d become a lawyer, but music and movement and words and pictures, combined, is what I’ve given my professional life over to, and it started with the violin.

Did being involved with music from a young age help to prepare you for performances with a famous band?
Yes undoubtedly. I was a backing singer in the band but wrote and produced some of our material. I was able to do that and as a result be a real asset to my band mates rather than a passenger because of the love of and instinct I had for music. That developed when I was young because if anything, I regressed when I was a pop star!
The excitement and fear and adrenaline that I felt when I performed at the Oscars with Lord of the Dance or in a stadium in Sydney with Liberty X- they were the same feelings and emotions, the expectation and excitement, that I felt playing at the festival. Knowing those feelings and figuring out how to enjoy them and use them is a key step in becoming a professional performer.