On the developments of the Festival…As I deal with each of the orchestras each year I think one of the best changes I’ve seen is the introduction of primary school orchestras who have learned their instruments in school. 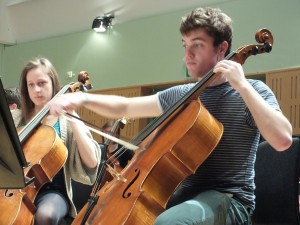 Vincent started learning the cello at the age of three but then moved to violin. His mother, Dorothy Conaghan, was his teacher and he would travel to courses she was teaching on and take lessons from other teachers. Vinnie then switched back to the cello where he started lessons in the Royal Irish Academy of Music with Annette Cleary and he played as part of the RIAM Symphony Orchestra.

Currently he is in his fourth year of Medicine in UCD. He plays as part of the UCD Symphony Orchestra and have been the recipient of a Symphony Orchestra Scholarship for the last three years. While with the Orchestra he has played concerts around Ireland and travelled to Germany, Belfast and Sweden. Vinnie is also a stage manager at the Festival every year, and along with his sister Alice they keep the performances running smoothly on the day.

Music is hard work but immensely rewarding – sometimes in a surprising way and I think that’s why I love it.

Can you remember the first festival you attended? Do you have a favourite festival out of them all?
I think the first festival I remember was the 10th anniversary festival. My sister Alice and I were helping out with the balloon drop for the end of the concert. I think that was a brilliant festival but they have all been enjoyable especially as my role has changed from year to year.

What impact did the National Concert Hall have on you at first?
The concert hall is very impressive when you see it for the first time. I think it has such a great impact on youth orchestras on their first performance. There’s very few places in Ireland at that stage in your musical life that will be grander or have such a reputation. From the stage and the seemingly endless rows of seats you see, to the backstage atmosphere of being part of a really professional setup is incredible.

Are you still involved in the festival? If so, has it changed much since you played there?
For the last few years I have worked as a stage manager for the festival. I plan and then carry out the staging of both concerts during the day as well as the rehearsals in between. With 8 orchestras taking part there are significant differences in size and formats between them. Over the years we have had all shapes and sizes of groups, from the massive symphony orchestras of 120 players to small ensembles of less than ten. As I deal with each of the orchestras each year I think one of the best changes I’ve seen is the introduction of primary school orchestras who have learned their instruments in school.

What was the best thing about being involved in the festival?
There’s so many positives from the festival it’s hard to pick out one in particular. From a personal point of view I have performing as part of an orchestra and then when I moved to the management side. Probably the best part has been being able to help other young musicians achieve the feat of performing in the National Concert Hall and meeting new people along the way.

Do you think your involvement in this has helped your future career?
I think it has, I’ve learned a huge amount about planning and people management. We routinely will deal with over 300 people in a day which definitely makes you better and allocating your time to handling the tasks that pop up during the day. I am currently in fourth year medicine so I think the festival is helping me prepare for long days on my feet dealing with different problems.

What part does music play in your life now? Where does your love of music come from?
I am a cellist in the UCD Symphony Orchestra and a recipient of an orchestra scholarship. This has enabled me to meet a great group of people and travel around Ireland and abroad. I would say that my love of music is constantly evolving which I think is the best way to view music. We start a new symphony in our orchestra and I will be captivated by that composer’s style and will want to listen to nothing else. I am not solely a classical musician and love every type of music from pop, rock to stage musicals. The joy of music is the endless amounts of melodies that are out there and that there will always be something refreshing. This can be a composer, a style or the people that you play with. Music is hard work but immensely rewarding sometimes in a surprising way and I think that’s why I love it.

What makes you keep coming back to be a part of the festival?
As I have previously said, I’ve been working at the festival for many years and have seen nearly everything that can happen in the space of the one day in February, however nearly is the important word there. I think I enjoy the challenge that each year presents from an organisational point of view. Most importantly though, there’s something heart-warming about the look in a child’s face as they step onto the stage in the NCH for the first time. The awe, amazement and excitement is worth all the work that we do and reminds me of the reason we are all still involved in music.